U.A.E., Russia seek to increase trade exchange to US$7 billion 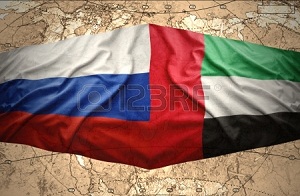 U.A.E. and Russia have agreed to increase their trade exchange by 133 per cent from US$3 billion to US$7 billion in the coming period, and stressed on the need for preparing a relevant action plan to specify areas of cooperation and joint investments, in various sectors including oil and gas, agriculture, industry, small and medium size enterprises (SMEs).

U.A.E. Minister of Economy, Sultan bin Saeed Al Mansouri, and Russian Minister of Economic Development, Aleksey Valentinovich Ulyukayev, during a meeting in Moscow, said it is important for the two countries to reach a draft economic agreement that supports their desire in making a qualitative leap in their economic cooperation in the areas that best serve their interests and bolster their outstanding relationship.

Minister Al Mansouri and Minister Ulyukayev expressed the desire of U.A.E. and Russia to expand their economic relations through joint projects in different sectors including industry, trade, construction, and to encourage investments in technology and information technology.

Minister Al Mansouri also noted that in addition to its modern infrastructure and competitive logistic services supported by information technology, U.A.E. has signed agreements with a large number of countries on the protection and encouragement of investments, as well as double taxation agreements which helped advance it to higher positions on global business performance indices.