President Barack Obama on Saturday backed away from an imminent military strike against Syria to seek the approval of the U.S. Congress, in a decision that likely delays U.S. action for at least 10 days. 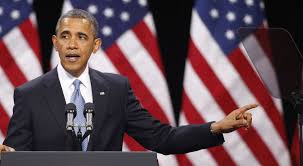 Obama, in a statement from the White House Rose Garden, said he had authorized the use of military force to punish Syria for a chemical weapons attack August 21 that U.S. officials say killed 1,429 people. Military assets to carry out a strike are in place and ready to move on his order, he said.

But in an acknowledgement of protests from U.S. lawmakers and concerns from war-weary Americans, Obama added an important caveat: he wants Congress to approve.

Congress is currently in recess and not scheduled to return to work until September 9.

“Today I’m asking Congress to send a message to the world that we are ready to move as one nation,” Obama said.

Obama’s decision was a big gamble that he can gain approval from Congress in order to launch a limited strike against Syria to safeguard an international ban on chemical weapons usage, guard U.S. national security interests and protect regional allies like Turkey, Jordan and Israel.

“I have long believed that our power is rooted not just in our military might, but in our example as a government of the people, by the people, and for the people,” Obama said.

His decision was also a significant shift away from what was perceived to be a strike fairly soon against Syrian targets. He had been prepared to act unilaterally after the British parliament refused to go along with American plans.

Protracted and expensive wars in Afghanistan and Iraq have left Americans reluctant to get involved in Middle Eastern conflicts.

Most Americans do not want the United States to intervene in Syria. A Reuters/Ipsos poll taken this week showed only 20 percent believe the United States should take action, but that was up from 9 percent last week.

A debate has raged for days in Washington among members of the U.S. Congress over whether, or how quickly, Obama should take action.

Senate Republican leader Mitch McConnell backed the move, which he said Obama had told him about.

“The president’s role as commander in chief is always strengthened when he enjoys the expressed support of the Congress,” said McConnell.

Obama’s decision was announced after he met his national security team at the White House. Top aides were to brief senators later in the day and members of the House of Representatives are to receive a classified briefing from http://www.businesstoday.me/wp-content/uploads/2022/12/sample10.jpgistration officials on Sunday.

The objective is to show solid proof that U.S. intelligence officials say shows conclusively that the Syrian government of President Bashar al-Assad launched a large chemical weapons assault in Damascus suburbs that left among the dead 426 children.

Obama has broad legal powers to take military action, and he insisted he felt he had the authority to launch a strike on his own. But he said he wanted Congress to have its say.