Norway’s prime minister worked secretly as a taxi driver in central Oslo for a day in June, leaving his passengers wondering whether their elected leader had quit the day job. 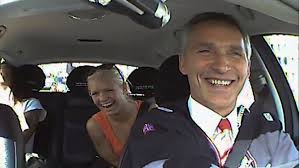 Wearing a taxi driver’s uniform and sunglasses, Jens Stoltenberg drove passengers around the streets of the Norwegian capital for several hours, confirming his identity only after his passengers realised who he was.

The stunt, dreamed up by an ad agency as part of Stoltenberg’s campaign for re-election, was filmed on hidden cameras. A video of the event was published on Sunday by daily newspaper VG and on the PM’s Facebook page.

Stoltenberg told the newspaper he had wanted to hear people’s honest views on politics.

“If there is one place where people say what they really mean about most things, it is in a taxi. Right from the gut,” he told VG.

“So, you have begun driving a taxi,” deadpans one passenger after realising who his chauffeur is. “Have you quit as prime minister?” asks another.

The prime minister’s passengers were in turn shocked, bemused and curious before their discussions turned to politics.

Stoltenberg, who has led the Nordic country for the past eight years, confessed he was not used to driving as he usually sits at the back of his chauffeured car.

At one point the prime minister gives the car an abrupt jolt, thinking he is pressing the clutch when in fact he is applying the automatic vehicle’s brake.

“I am not really happy about the driving,” says one passenger. “I guess I will live,” says another. “Your driving is really bad,” says a third.

Politicians in Norway and the other Nordic countries tend to be more accessible than their colleagues in other European countries. One can often bump into Stoltenberg, for instance, at the weekends walking in the woods surrounding Oslo.

Asked by VG if he would consider becoming a taxi driver full time were he to lose re-election, Stoltenberg said: “I think the nation and Norwegian taxi passengers are best served if I am the prime minister and not a taxi driver.”

Parliamentary elections will take place on September 9. Stoltenberg’s party, Labour, is trailing in the polls against the opposition Conservatives.