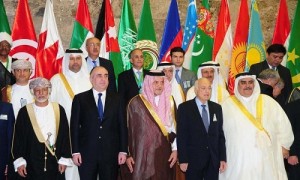 The first session of the Forum on the Economy and Arab Cooperation with the Central Asian States and the Republic of Azerbaijan came to a close in Riyadh on Tuesday.
Participants in the Riyadh Declaration, which was adopted by the forum, stressed their intention to work on the development of economic relations and partnership between the two parties to contribute to the development and well-being and contribute to the establishment of peace and stability in their regions.
They underlined the depth of historical, religious and cultural relations between Arab countries, and the Central Asian States and the Republic of Azerbaijan.
The participants emphasized the prospects of economic cooperation and the advantages enjoyed by the Arab countries and the Central Asian Republics and the Republic of Azerbaijan starting with their rich natural resources to the promising investment opportunities of food production, power generation and petrochemical, mining and tourism industries.
They also called for adopting the language of dialogue and openness to the other and constructive engagement as a way to achieve peace, security and stability in their regions and the world and called for their countries to strengthen diplomatic and political presence among them.
They also called for reinforcing bilateral cooperation in renewable energy, peaceful nuclear energy uses, trade, transportation, communications, environment, sustainable development, agriculture, training, tourism, statistics, industry and scientific research, according to the declarations.
Politically, the participants called for more pressure on Israel to stop its settlement activities in the occupied city of Jerusalem.
They reiterated their support for a viable and independent Palestinian State on the June 1967 borders with Jerusalem as its capital.
They also expressed concern about the deteriorating situation in Syria and their support for a negotiated political solution.
Finally, the conferees emphasized that peaceful solutions should be found for the Iranian-occupied three islands of the United Arab Emirates (UAE) and the territorial conflict between Armenia and Azerbaijan.