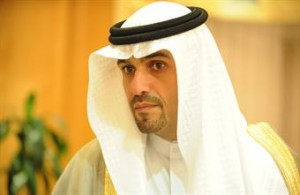 Finance Minister Anas Al-Saleh Saturday hoped the Public Institute for Social Security’s (PISS) Labor Union would cancel their strike they intended to stage tomorrow, saying dialogue was the best mean to achieve mutual interest.
In a statement, Al-Saleh called on the union to place interests of citizens above anything else. He emphasized that like the labor union, he was very keen on the right of employees of PISS.
Al-Saleh said he was astonished to learn the labor union planned to stage a strike tomorrow despite his official invitation to sit with the union’s representatives to discuss their wage-raise demands.
He noted that he asked the union last Thursday to meet tonight to discuss how “just and legitimate” their demands were. “But we were surprised of their announcement of the strike, which will undermine interests of citizens and paralyze a vital public facility,” he said.
Al-Saleh said he was understanding the demands of the labor union but negotiations were ongoing thus the strike should be cancelled.