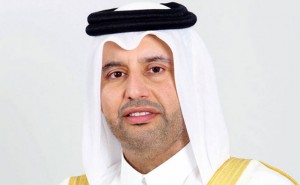 HE the Minister of Economy and Commerce Ahmed bin Jassim bin Mohamed Al Thani said that accelerated development in the Qatari-Turkish relations is a proof of the sincerity of the intentions, harmony of visions and the existence of many commonalities. In his speech before the opening session of the Qatari-Turkish Business Forum, HE the Minister said that the visit of the Turkish business delegation to Doha proved both sides’ keenness on implementing the decisions and recommendations developed by the joint committees. He pointed that the visit by a number of Turkish businessmen to meet their Qatari counterparts indicated the similarity of both countries visions in giving the private sector a space to explore future investment possibilities. He also noted that would have a positive impact on increasing the volume of trade exchange between the two countries, as well as exploring new horizons of constructive investments which will contribute to boosting productivity and increasing the gross domestic production (GPD) in both sides, pushing ahead the rates of economic growth.
During his speech in the Qatari- Turkish Business Forum, HE Sheikh Ahmed bin Jassim bin Mohamed Al Thani said that Qatar supported the ideas and opinions provided by the leaders of the business within the creative economy that is based on the pillars of Qatar National Vision of 2030. He added that this vision is based not only on increasing rates of economic growth and raising the level of per capita income but it also moved towards achieving social justice through creative capacity building and through the latest techniques of science, education and training out of the belief that man is the maker and the purpose of development. He stressed that the vision will be a key player in the maintenance of the environment through the development of trade and industry which are created to maintain human health and environmental sanitation in order to preserve the climate within the institutional work which is based on creativity, innovation and transparency. HE the Minister of Economy and Commerce while welcoming the Turkish Minister of Economy and the delegation accompanying him in Qatar, wished success for the deliberations in both the private and public sectors. In remarks on the sidelines of the forum, HE the Minister of Economy and Commerce Sheikh Ahmed bin Jassim bin Mohammed Al Thani said that the talks he held with his Turkish counterpart Nihat Zeybekci, on the sidelines of the forum, explored investment opportunities between the two countries, adding that the economic growth of both countries is an incentive for the Qatari and Turkish businessmen to increase their cooperation. He pointed out that the talks also tackled the obstacles that hinder efforts to increase trade volume between Qatar and Turkey, which currently exceeds $700 million.