Dubai’s trade for auto parts and accessories was valued at US $12.1 billion in 2014, a 10% increase over the previous year, new figures released by Dubai Customs revealed recently. 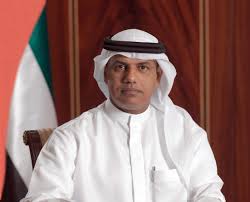 Imports of the Emirate’s booming automotive aftermarket trade were valued at US $7.08 billion last year, while the value of exports and re-exports coming out of Dubai was US S4.9 billion. “Serving a pivotal role in automotive spare parts trade, Dubai acts as liaison between Asian, European and North American manufacturing countries and the consuming markets in the region,” noted HE Ahmed Mahboob Musabih (left image), Director, Dubai Customs.

Meanwhile, Saudi Arabia (US $645.8 million), Iraq (US $294.3 million) and Afghanistan (US $218 million) were the Emirate’s biggest export and re-export markets in 2014, accounting for a combined 23 per cent of Dubai’s exports and re-exports of auto parts, accessories, tyres, and engine components for the year.

Three major trading partners claimed 49% share of Dubai’s total automotive parts imports. Japan was the top destination from which Dubai’s car parts originated, claiming US $1.67 billion of the market. South Korea followed with US $967.3 million worth of imports. China was the third most important import source valued at US $880 million.

The figures were announced to an audience of auto parts manufacturers, suppliers, fleet operators, and regulators at the Automechanika Academy’s Commercial Vehicles Conference, which took place on the side-lines of Automechanika Dubai 2015. 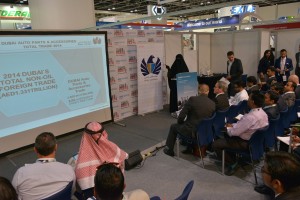 Meanwhile, according to global analysts Frost & Sullivan, 115,171 trucks and buses were sold in the GCC in 2014, bringing the total number of commercial vehicles on the region’s roads to 1.2 million.

The 1.84 million Light, Medium and Heavy Commercial Vehicles expected to be operational in the GCC by 2020 has in turn created a big demand for the CV spare parts market, which was valued at US$3.38 billion in 2014, and likely to reach US$5.49 billion by 2020, growing 8.4 per cent annually.

Subhash Joshi, Regional Head for Automotive & Transportation in the Middle East and North Africa at Frost & Sullivan, spoke about the trends and opportunities in the GCC CV market, as crude oil exports and economic indicators point toward an accelerated growth path.

“Increasing population and rising per capita incomes are also driving higher consumption of goods, and the GCC economy is highly dependent on imports for these goods.  Any growth in consumption patterns will lead to more transportation and logistics activities, resulting in higher demand for trucks and buses,” he added.

The rise of the regional commercial vehicles industry and correlating demand for CV auto parts and services came as good news to the Truck Competence exhibitors at Automechanika Dubai 2015. A total of 891 out of 1,889 exhibitors at the three-day event had truck spare parts, equipment and services within their product portfolio, a massive 76 per cent increase over the previous year.

According to Frost & Sullivan, Saudi Arabia and the UAE dominate the Gulf region’s CV auto components market, accounting for a combined 84 per cent regional market share in 2014.

Saudi Arabia’s CV Spare Parts demand was valued at US$2.05 billion in 2014, and projected to be worth US$3.65 billion by 2020, while the UAE’s US$800 million market in 2014 is expected to reach US$1 billion by 2020. Maintenance (filters, spark plugs, belts, brakes and shoes / linings) and mechanical parts (pumps, alternators, thermostats, starters, and absorbers) account for 72 per cent of the market, while there’s also high demand for collision parts in the UAE, Saudi, and Kuwait.