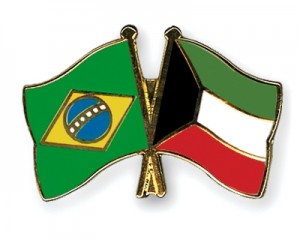 The Charge d’Affaires of the Embassy of Brazil in Kuwait Patricia Lima hailed historic relations between both countries and said she would be working effortlessly to expand bilateral trade ties.
Brazil, which is the seventh largest economy in the world, predicts that over 600,000 tourists will visit the country to attend the 2014 FIFA World Cup finals, and this will give further impetus to economic growth, Lima told KUNA on the fringes of Brazilian Trade Week, currently being hosted by local supermarket Sultan Center.
She described her country’s relations with the Gulf Cooperation Council and the wider Arab region as “historic” and having the appropriate groundwork which could be built upon.
For his part, the Secretary General of the Arab-Brazilian Chamber of Commerce Michel Halabi said that trade relations were exceptional.
Brazilian exports to Gulf states in 2013 were worth USD nine billion while exports going the opposite direction were worth USD 7.5 billion, he said, expecting these numbers to increase by five percent this year.
Saudi Arabia is Brazil’s number one trade partner, he added, followed by the United Arab Emirates. On Kuwait, he said that it was the only Gulf state where the event is being hosted, due to the importance of its market.
The event, which ends on June 16, is showcasing 150 Brazilian products, and is being organised by the Brazilian Embassy in Kuwait and the Brazilian Trade and Investment Promotion Agency, also known as Apex-Brasil.
On bilateral trade exchange with the Arab world, he said this amounted to USD 25 billion – Kuwait being the sixth largest partner in this region.
The Brazilian economy is expected to witness a moderate rise in 2014 by two percent, he said, indicating that this would rise to 3.5 percent the following year.