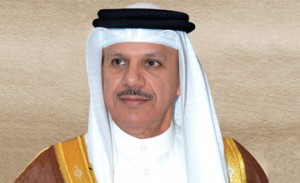 Gulf Cooperation Council (GCC) Secretary General Abdullatif Al-Zayani applauded the important role played by the GCC Financial and Economic Cooperation Committee in deepening economic integration among member states, according to KUNA.
In his speech at the 98th meeting of the GCC Financial and Economic Cooperation Committee held here Wednesday, Al-Zayani said that the committee is doing a great job to help get rid of the hindrances that obstruct the full economic integration among Gulf countries.
He expressed hopes that today’s meeting would end up with resolutions that help achieve the economic aspirations of the Gulf people particularly with regard to the creation of the common market and the removal of the customs barriers.
For his part, Kuwait Finance Minister Anas Al-Saleh said that the conferees have agreed on the different topic and proposals that were discussed during the meeting. The officials have also tasked subcommittees to conduct the required studies to achieved the agreed upon goals.
He told reporters following the meeting that the officials had shared almost identical views on the tackled issues.