The boss of Amazon, Jeff Bezos, has agreed to purchase the Washington Post newspaper for $250m (£163m). Mr Bezos is buying the paper and its other print properties in a personal capacity. 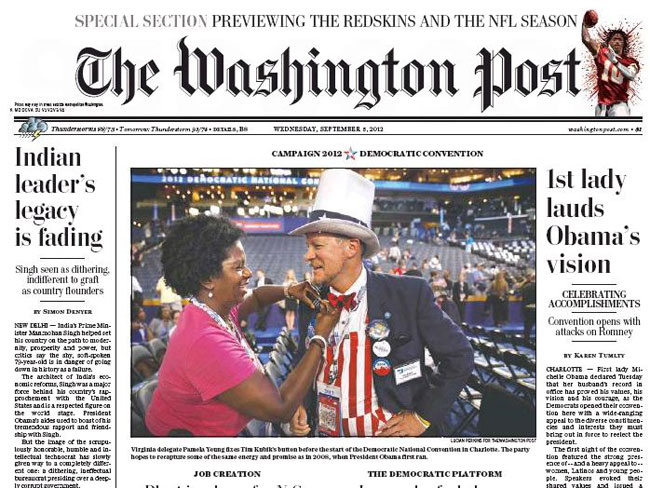 The Post has been owned by the Graham family for 80 years. “Years of familiar newspaper-industry challenges made us wonder if there might be another owner who would be better for the Post,” said Post chief executive, Donald Graham.

“Jeff Bezos’ proven technology and business genius, his long-term approach and his personal decency make him a uniquely good new owner for the Post.”

The Washington Post Company also owns Kaplan, a test preparation company, in addition to other properties. Those will stay under the ownership of the Grahams as part of a yet-unnamed entity.

The sale is expected to be completed in the next 60 days.

The flagship paper, known for its coverage of the Watergate scandal, has suffered in recent years as the internet has hurt advertisement sales and it has struggled to adapt its print coverage to the web. Journalist Carl Bernstein, who, along with Robert Woodward, broke the Watergate story in the 1970s, said he had high hopes the announcement would “represent a great moment in the history of a great institution”.

He added that it showed “recognition that a new kind of entrepreneurship and leadership, fashioned in the age of the new technology, is needed to lead not just The Post, but perhaps the news business itself”.

“Jeff Bezos seems to me exactly the kind of inventive and innovative choice needed to bring about a recommitment to great journalism on the scale many of us have been hoping for, while employing all the applicable tools and best sensibilities of a new era and the old,” he said.

The Post has been “declining in circulation especially among young readers,” Horizon Media analyst Brad Adgate told the BBC.

Nonetheless, he added: “I always thought this would be a newspaper that would be able to withstand the digital tide because of the name and the prestige. It is, next to the New York Times, the most prestigious paper in the country.”

According to the Alliance for Audited Media, a newspaper auditing firm, the Washington Post was the seventh most popular daily newspaper in the US this year, with a total circulation of 474,767 – a 6.5% decline on last year. In an open letter posted on the Washington Post’s website, Mr Bezos said he would not be leading the paper on a day-to-day basis and sought to reassure nervous employees, but saying he would not seek to change “the values” of the paper.

However, he added: “There will, of course, be change at The Post over the coming years…The internet is transforming almost every element of the news business: shortening news cycles, eroding long-reliable revenue sources, and enabling new kinds of competition, some of which bear little or no news-gathering costs.” Mr Bezos said he did not have a plan yet for what exactly he thought those changes would be.

Faded glory   The sale took many by surprise.

“We’ve all been broadsided by the acquisition. There are few things that come as a surprise any more but this one did,” said Rebecca Lieb, an industry analyst at the Altimeter Group.

“However, when you really start thinking about it, it makes sense – all because of digital,” she said, citing Mr Bezos’s experience with digital delivery and personalisation at Amazon.

In a filing with regulators, the company said, however, that Mr Bezos was not purchasing its other notable online properties: Slate magazine, TheRoot.com, and Foreign Policy.

This is the second sale of a major US newspaper in as many days.

Over the weekend, the New York Times announced it had sold another iconic newspaper, the Boston Globe, to John W. Henry, the owner of the baseball team the Boston Red Sox, for $70m – a fraction of the $1.1bn the company had paid for the paper in 1993.

Mr Bezos said he did not have a plan yet for what exactly he thought those changes would be.