The Department of Community Police at the Abu Dhabi Police General Headquarters has won the Safe School Award from the American National Association of School Resource Officers, NASRO, for the Safer Schools Project.

On winning the award, Major General Dr. Nasser Lakhrebani Al Nuaimi, Secretary-General of the Office of H.H. Deputy Prime Minister and Minister of Interior, said, “This award crowns the efforts that have been made to raise the position of the UAE in international forums.”

He also hailed H.H. Lt. General Sheikh Saif bin Zayed Al Nahyan, Deputy Prime Minister and Minister of the Interior, for his support and keenness to continue striving for greater development and excellence, for his march forward in pursuit of innovation, and for proposing creative initiatives to accomplish further achievements for the proud nation.

The Secretary-General congratulated the team of the advanced “Safer Schools” project, wishing them more success, and urging them to continue striving to achieve excellence. “Continue your efforts in order to fulfil the hopes of everyone who wishes to achieve the highest levels in the provision of police, security, and community services for citizens and residents alike in this great nation,” he said. 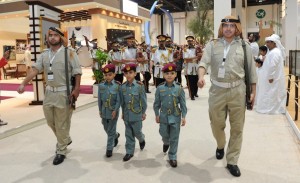 In a congratulatory message to the Abu Dhabi Police, the NASRO Awards Committee Chair, Earl Roach, said, “The win was well deserved, as you have far surpassed the other applicants of this award.”

Colonel Mubarak bin Muhairom, General Director of the Community Protection and Crime Prevention at the General Secretariat of the Office of H.H. Deputy Prime Minister and Minister of Interior, said, “Winning this award confirms the clear vision of the police command, as they have laid the foundations for police development and have set the course towards more serious and innovative work methods that are highly beneficial for the community of the UAE.”