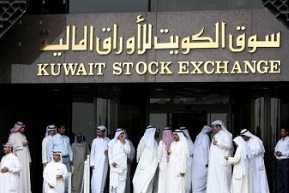 Generation of profits, shifting investment funds from one portfolio to another and hefty speculations played major role in pushing the Kuwait Stock Exchange (KSE) indexes down in the past week sessions.
Al-Oula brokerage company said in a report publicized on Friday the benchmark dropped below the psychological barrier, 7,000 points, however, stocks under the Kuwait-15 index remained largely unaffected, though it fell, in the week’s third session, by 107 points — the deepest decline in this year’s record.
The market closed trading on Thursday with fall of the three main indices. The price index shed 39.9 points dropping to level of 6,986, while the weighted index lost 2.29 points. Likewise, the Kuwait-15, 9.49 points.
Kuwait’s bourse opened the past week trading, with bullish indices, maintaining this performance in the week’ second session, however, in the third session, they began to turn bearish, where the weighted index lost four points.
Hefty stock sell-offs, witnessed in Tuesday’s session, led to fall of a large number of blue-chips, namely Gulf Bank and Zain — the lowest since peak of the global financial crisis (2007-2008). Simultaneously, the market turned into a scene of random selling, while funds’ shifting that targeted the National Bank stocks and other blue-chips resulted in hiking turnout value.
Despite increase of the Kuwait-15 index in Wednesday’s session, 10 points, likewise, the weighted, two points, the benchmark closed bearishly, amid stability of leading stocks and portfolios’ trades in a large number of heavyweights, such as stocks of banks and services companies.
Al-Oula report noted absence of positive incentives, where the blue-chips’ bearish trend reflected lackluster sentiments as to expanding investments, while the small chips became targets of speculations.
Traders’ jitters were deepened due to several factors, such as liquidity shortage and prevalent speculations as well as losses reported in the Saudi stock market.
Now, the investors are pinning high hopes on some technical factors that may result in ending the lackluster status, such as positive results from the oil market.
Liquidity in Sunday’s session posted record decline too, unprecedented since July, where turnover value reached KD 9.3 million, 60 percent of which were directed toward the Kuwait-15 index shares.