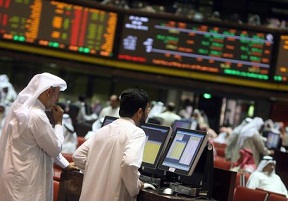 Kuwait Stock Exchange (KSE) ended last week with mixed performance signaling a slight improvement after weeks of settling at the red zone, a specialized economic report showed Saturday.
The report, by Bayan Investment Company, pointed out that the Price Index closed at 6,981.85 points, up by 0.60 percent from the week before closing, the Weighted Index decreased by 0.11 percent after closing at 471.05 points, whereas the KSX-15 Index closed at 1,143.07 points down by 0.85 percent.
Furthermore, last week’s average daily turnover decreased by 25.72 percent, compared to the preceding week, reaching K.D 15.73 million, whereas trading volume average was 139.65 million shares, recording increase of 7.54 percent.
The report noted that the Price Index was the only indicator that was able to realize some gains, benefiting from the purchasing power that included many small-cap stocks in the financial services and the real estate sectors, especially that such stocks’ prices dropped noticeably during the last few weeks and reached tempting purchasing levels; whilst the selling operations continued to be in control over some leading listed stocks, which affected the performance of the Weighted and KSX-15 indices, that recorded various losses b6 the end of the week.
“In addition, the stock market initiated its weekly trading with a good increase to its three indices, especially the Price Index that was able to regain the 7,000 points level after it lost it during the preceding week trading, however did not last for long, as the market declined in a later sessions affected by the random selling operations to drop below the same level once again as a result to the price decline of many large-cap and small-cap stocks,” Bayan report said.
Moreover, the market liquidity declined noticeably during last week’s trading, due to the traders’ refrain from trading during this unstable market period, until a motivating factors appear to push the market for stability once again.
“Also, the stock market is expected to remain performing the same during the upcoming weeks, especially during the holy month of Ramadan, which usually the market slows down, plus that the end of the second quarter period is approaching, and the listed companies are going to announce it’s financial results, which is expected to be disclosed during the few upcoming weeks,” added the report.
For the annual performance, the price index ended last week recording 7.52 percent annual loss compared to its closing in 2013, while the weighted index increased by 4.02 percent, and the KSX-15 recorded 6.99 percent growth.
As for the performance of the listed sector, the report showed that eight of KSE’s sectors ended last week in the green zone, while the other Four recorded declines.
“Last week’s highest gainer was the Technology sector, achieving 6.66 percent growth rate as its index closed at 958.74 points. Whereas, in the second place, the Financial Services sector’s index closed at 950.34 points recording 1.39 percent increase. The Real Estate sector came in third as its index achieved 0.79 percent growth, ending the week at 1,191.14 points,” reads the report.
On the other hand, it stated that the Consumer Goods sector headed the losers list as its index declined by 2.80 percent to end the week’s activity at 1,244.51 points. The Health Care sector was second on the losers’ list, which index declined by 2.73 percent, closing at 1,008.98 points, followed by the Oil & Gas sector, as its index closed at 1,147.22 points at a loss of 0.45 percent.
“The Financial services sector dominated total trade volume during last week with 392.26 million shares changing hands, representing 56.18 percent of the total market trading volume. The Real Estate sector was second in terms of trading volume as the sector’s traded shares were 23.84 percent of last week’s total trading volume, with a total of 166.49 million shares,” added the report.
On the other hand, the Financial Services sector’s stocks were the highest traded in terms of value; with a turnover of K.D 21.61 million or 27.47 percent of last week’s total market trading value. The Banking sector took the second place as the sector’s last week turnover was K.D 26.38 million represented 20.75 percent of the total market trading value.