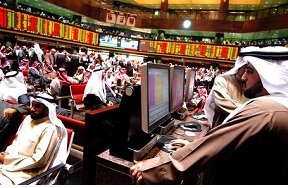 The Kuwait Stock Exchange (KSE) indicators declined steeply for the second consecutive week, in light of the continued selling pressures control over the trading activity during most of last week’s sessions, specialized economic report showed Saturday.
The report, by Bayan Investment Company, added that the enormous selling operations have negatively affected all the market indicators, to witness a strong drop of more than 4 percent, ending the week in the red zone on an annual level, for the first time during the current year.
It stated that that the Price Index closed at 6,463.76 points, down by 4.61 percent from the week before closing, the Weighted Index decreased by 4.13 percent after closing at 437.70 points, whereas the KSX-15 Index closed at 1,061.90 points, down by 4.36 percent.
Furthermore, last week’s average daily turnover increased by 14.25 percent, compared to the preceding week, reaching K.D 21.66 million, whereas trading volume average was 159.28 million shares, recording a decrease of 7.09 percent.
For the annual performance, the report showed that the price index ended last week recording 14.38 percent annual loss compared to its closing in 2013, while the weighted index decreased by 3.35 percent, and the KSX-15 recorded 0.61 percent loss.
At the sectorial level, Bayan pointed out that all of KSE’s sectors ended last week in the red zone, except for one sector.
The Insurance sector was the only gainer, and ended last week with a 1.17 percent increase reaching 1,194.43 point. On the other hand, the Financial Services sector headed the losers list as its index declined by 6.86 percent to end the week’s activity at 833.43 point.
The Oil & Gas sector was second on the losers’ list, which index declined by 5.74 percent, closing at 1,040.77 point, followed by the Banks sector, as its index closed at 1,000.69 point with a loss of 5.33 percent.
The data also showed that the Financial Services sector dominated a total trade volume of 377.41 million shares changing hands during last week, representing 47.39 percent of the total market trading volume. The Real Estate sector was second in terms of trading volume as the sector’s traded shares were 20.27 percent of last week’s total trading volume, with a total of 161.40 million shares.
On the other hand, the Banks sector’s stocks were the highest traded in terms of value; with a turnover of K.D 58.74 million or 54.24 percent of last week’s total market trading value. The Financial Services sector took the second place as the sector’s last week turnover was K.D 18.72 million represented 17.29 percent of the total market trading value.