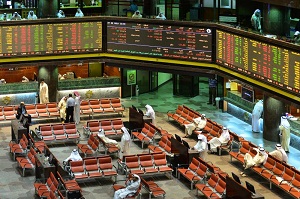 The action came to a stop Monday with main indices at Kuwait Stock Exchange putting on red as the curtain fell on a weighted index reading of 480.4 points on a drop of 0.8 points, while the price index came to 7,108.95 points, a down of 33.47 points. The KSX 15 meanwhile ended the day at 1,174.77 points, actually up 1.62 points.
Trades came to 3,160 transactions worth KD 14.54 million, with 103.996 million stocks changing hands.
The sector indices were in much the same mood, with four green readings only at end of trade and eight nine readings, and the last two showing no change.
Top gainer share was (NSH), while biggest loser was (HCC). Most traded stocks were (GFH), (KBT), (IFA), (BAYANINV), and (SAFRE).
The market had been in red territory since yesterday, with indices showing drops of over 100 points often during the trading session.