Price of gold dropped on the international markets at the end of last week trading to USD 1,387 per ounce, losing USD 25 per ounces compared to its price on Tuesday trading. 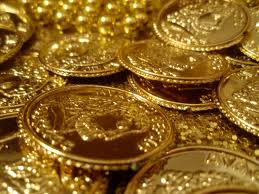 In a report issued Sunday, Sabaek Al-Kuwait for precious metals trade company described the decline as slight and expected as part of price correction movement after the yellow metal managed to overcome the market resistance point of USD 1400 per ounce. The price of pure gold came to KD 12,500 per kilo in the Kuwaiti market. It added that the political developments and the delay of the US military action on Syria as well as the gains made by the European currency vis-@-vis the US dollar have played a major role in the retreat of the precious metal price. “It was even projected that the yellow metal will go down below the level of USD 1360 per ounce,” the report pointed out. The report predicted that gold price will continue its upward trajectory in the coming week with tension in the Middle East running high. Markets are awaiting results of the US Federal Reserve monetary committee related to determining the monetary policies of the Reserve during the coming period, regarding that, forecasts indicate the possibility that the Reserve would reduce the asset purchasing program after the recovery of the local economy. As for silver, the report said it took downward trends during the week to close at USD 23.8 per ounce. Meanwhile the price of platinum and palladium both slipped to USD 1495 and USD 696 per ounce, losing USD 30 and USD 28 per ounce respectively.