Central to the holy month of Ramadan is the observance of Iftar, whereby families, friends and communities come together to break their fasts together. However, it’s not just in the faith of Islam that food holds such a central and symbolic place: at tables of grace spanning the world’s religions, food has the power to transcend boundaries. This is a topic very close to the heart of Indian celebrity chef, Vikas Khanna who has lectured at Harvard University in the US on ‘Food and Faith’, and released his new Dalai Lama-narrated documentary, ‘Kitchens of Gratitude’ in May at Cannes Film Festival.

In the documentary, Khanna discusses his travels throughout the world during which he discovered “the oneness of communities created through food” and demonstrates that “from the community kitchens of Sikh temples, to the modest feasts of Buddhist monasteries to Jewish soup kitchens and Muslim Iftars” food has the power to permeate borders and boundaries like nothing else on earth.

“Every faith is based on sharing and the sharing of food is the first essential to breaking down barriers. I thought –  that’s the subject the world needs to hear about right now!” says Khanna during an interview with Catering News at his Dubai restaurant, Junoon, in Shangri-La Hotel, Sheikh Zayed Road, the second venue in his portfolio. The original, Junoon in New York City, opened in 2010 and earned a Michelin star for four consecutive years.

The boundless nature of food is something Khanna witnessed growing up, explaining that while he was born and raised in Punjab, North India, many of his grandmother’s dishes were from bordering Pakistan – although he may not have noticed at the time. Khanna explains: “Pakistan was a part of India and the borders can’t divide a culture like that, there will be overlapping, there will be resonance, there will be echoes.”

At the time of our interview, Khanna was working on creating a dish from Pakistan for the menu at Junoon Dubai, inspired by the street food of Lahore he discovered on a visit to the country two years ago. “We’re developing a kebab. The translation of it is horrible, it means sandal kebab because it looks like a shoe! But it’s amazing, and that’s going to go on the menu,” he explains.

In addition to Pakistani influences, Khanna likes to incorporate Chinese and Tibetan notes, and this blurring of borders has become a trademark of his cuisine.

“We’re going beyond the borders of India. I get inspiration from Tibetans, many of whom live in India,” Khanna says, highlighting his use of Tibetan flour to make some of his breads. “After the revolution in China, everyone came to India as a land of asylum and their cuisine is so different to Indian cuisine but they had to adapt to what was available locally, and I’ve started incorporating their accents into my food. I’m proud to show the diversity of Indian cuisine, otherwise it would have a generic structure that’s almost cloned.”

Khanna sees overlaps in cuisines and cultures everywhere, including Dubai, which he likens to a “mini-India”. He is amazed by how the flavours and ingredients of Indian food are very much connected to Emirati cuisine.

“Even the native foods of the UAE are so intertwined with Indian food. There’s so much influence and trade; the history of the spice routes. If you look at the cuisine there is such a mix of ingredients, there’s such an overlap in the structures of the cuisines, the techniques, the tastes, so because of that, the natives [of the UAE] think that [Indian] is their cuisine,” he says. 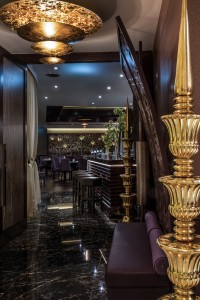 In addition to the Pakistani dish, Khanna was launching some new desserts during his visit – Thandai, a milk-based summer drink, and rasmalai, a Bengali dessert consisting of soft paneer balls immersed in chilled creamy milk. Inspired by the traditional recipes, Khanna has altered the formats to present the dishes in new ways.

“In the Thandai, we have incorporated almonds, saffron and cardamom, and for the rasmalai we’re doing shots. So we make them without changing the beauty or the memory of the dish, just the form of it,” he explains.

Changes to Junoon Dubai’s menu take place less regularly than in the New York venue, where Khanna is based. Comparing the two cities, he comments: “The market in [New York] has evolved in a totally different way. It’s so much about the dynamics of the cities. If you’re opening a generic restaurant or something based on fast food, then you’ll do what the British love since that’s what made Indian a cuisine of the world. But when you’re doing handcrafted cuisine or more researched cuisine in a niche market, it requires more imagination.”

The major difference Khanna notes between Dubai and New York is the availability of ingredients. “I feel here you get everything, and it’s surprisingly, amazing quality. But when you compare it to what we do there, you have so many more things at your disposal in New York. For example, if you’re doing eggplant, you’ll have 60 different variations available.”

That said, Khanna loves Dubai and is amazed by how quickly the culture has developed in this part of the world. “This is very new but the way it has evolved is fantastic – it’s never happened before on this planet,” he says. “It took other countries centuries to develop a culture but here within a few decades, they’ve made such an amazing culture. It’s very eclectic, it’s very young,” he says.

However, he is very aware of the increasing competition among fine-dining Indian restaurants in Dubai, with venues such as Mint Leaf of London, Indego and Ashiana by Vineet, and Bombay Brasserie at Taj Dubai just some of the rivals on the market.

“I think because the local market is so developed and has such amazing choice now, you’ve got to be at the top of your game,” Khanna admits. However, he believes that Dubai’s proximity to India is something that stands Junoon in good stead. “It’s a three-hour flight away and people just come here to eat. It’s amazing how the market has opened up and of course it’s the middle classes earning more money which really helps fine-dining restaurants,” he says.

In addition to Dubai, Khanna expresses high praise for Oman, saying “I’m crazy about that city!”, while Abu Dhabi is another market on the chef’s radar. “Abu Dhabi is more authentic [than Dubai]. I just love it; it’s not got so much influence of the western culture as Dubai. It’s still native and you still have that preserved culture that’s overlapping and struggling to survive within western parameters,” he says.

Yet despite his appreciation for the region, it is clear that expansion is not the top priority for Khanna at the moment. With just two restaurants in the world, he admits that growing a portfolio as a celebrity chef comes with its challenges. 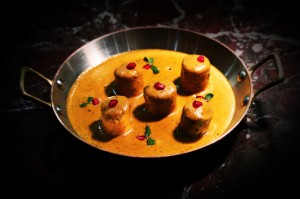 “It’s not easy for chefs like us to expand,” he comments. “I’m not going to use the phrase ‘control freak’ but sometimes you feel you’ve got to have trust.”

A more urgent focus than expansion for Khanna is using his passion for food and his celebrity status to help others, commenting: “It’s interesting using food in a totally different aspect; the [fundraising] activities won’t stop!”

This month, Khanna is doing a major campaign to sell his new book, ‘Utsav: A Culinary Epic of Indian Festivals’. The first 12 copies of the limited-edition publication are being hand-delivered by Khanna to the likes of US President Barack Obama, the Dalai Lama, and Indian Prime Minister Narendra Modi, among others.

“I’m gifting them this book because India incorporates every faith and it’s about every celebration of every festival, ritual, ceremony, custom, and tradition from the smallest to the largest community,” he says.

The first copy has been auctioned off, with the profits going to the Smile Foundation, an Indian NGO set up to conduct initiatives effecting positive change in the lives of underprivileged children, their families and communities.

He has also pledged $1 million in one year from the profits of both his restaurants to provide a packet of milk to every street child in India, and this reflects the essence of Khanna’s philosophy – that food can play a major part in solving the world’s problems. “Imagine a city where nobody is hungry – what a blessed Utopian concept!” he exclaims.

Asked about his vision for the future, Khanna smiles and says, “Can we see into the future? I can’t see the future.” Instead, he prefers to leave it up to what he refers to as “cosmic destiny”.

“Sometimes you wish for something and it happens for you, and sometimes you try and try and it doesn’t happen. You’ve got to leave a few things in your life up to the universe; what will be will be. We’re going to take one day at a time and do the best within our abilities,” he says.