The UAE is proud of its clean record of human rights and has made significant progress in upholding and protecting human rights and combating crimes of trafficking people, Mohammed Ahmed Al Murr, Speaker of the Federal National Council (FNC), has said.

‘The UAE was among the first countries of the world which introduced legislation that guarantee justice and equality to all without distinction of religion, race, colour and language, and is working in a true partnership with the international community to improve human rights in various aspects,’ Al Murr said in his opening remarks at the symposium, entitled ‘Human Rights in the UAE,’ organised by the House’s human rights committee in Dubai. 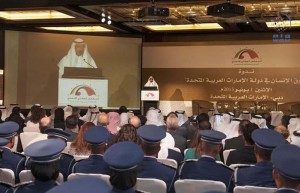 The event, he affirmed, underscored the deep understanding of the UAE government, civil society organisations and the FNC of the vital importance of deepening respect for, and protecting basic human rights and freedoms and combating human trafficking. He stressed that these rights, which are guaranteed by the UAE constitution and international laws, form key pillars of our tolerant Islamic religion, and inherent UAE values and traditions and constitute core parts of the State’s internal and foreign policy.

‘Since its founding in 1971, the UAE has adopted a holistic approach which concentrates on political, civilian, economic, social, educational, cultural and health rights out of its conviction that human rights is an integrated and interactive system that serves the welfare of the UAE citizens and expatriate residents and enables both to enjoy comfortable, decent lifestyle at par with international best standards,’ he noted.

‘Many national organisations are working diligently and making pioneering efforts to improve the human rights conditions in the UAE. The UAE Vision 2021 features integrated policies and strategies that advocate and protect basic human rights and freedom,’ he added.

Citing international recognition of the UAE’s respect for human rights, he recalled that UN Human Rights Council in 2012 elected the UAE as its member for three years. The UAE also won the European Parliament’s award for closing the gender gap.

The UAE, he continued, had also formed the “UAE Gender Balance Council,” a federal entity aimed at boosting efforts to evolve and enhance women’s role as key partners in building the future of the nation. The UAE earned top marks from a Norway-based human rights group for its work to improve its society across a wide range of quality-of-life categories. The International Human Rights Indicator (IHRRI), released by the Global Network for Rights and Development (GNRD), ranked the UAE first among Arab countries and 14th globally for respecting human rights.

On the FNC’s role in advancing human rights, Al Murr said the House had worked together with the government in drafting and endorsing legislation that guarantee basic human rights and freedoms. The House, he went on, had also set up a human rights committee to take care of human rights issues and support the government’s efforts in that respect.