The Directorate-General of Civil Defence at the Ministry of Interior, MoI, has recently held a meeting to discuss plans for developing and upgrading work methods to the highest levels.

Major General Jassem Muhammad Al Marzouqui, Commander-in-Chief of the Civil Defence at the Ministry of Interior, chaired the meeting which was attended by the general directors and directors of the UAE Civil Defence departments. 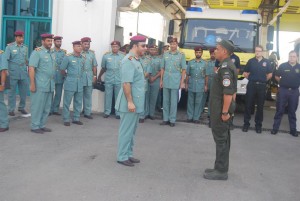 During the meeting, Major General Al Marzouqui declared that a comprehensive development work plan for members of the Civil Defence authorities will be set. The plans will include strategies for the coming years aimed to drive preparation through training and rehabilitation programmes in accordance with the best international practices. The plans will additionally incorporate smart prevention and safety initiatives and projects.

He said, “The Directorate General of Civil Defence strives to embody the directives of the police leadership, which are to keep up with the continuous developments that we are witnessing in every field. Due to the wide range of services that the Civil Defense authorities provide to the public, the police leadership has shown immense interest and support for the directorate.”

Major General Al Marzouqui called upon the directors of the UAE Civil Defence departments to pay attention to the needs of customers and to swiftly handle their transactions. He also instructed them to conduct field visits and surveys, as these methods are key factors in the next phase of the Civil Defence development.