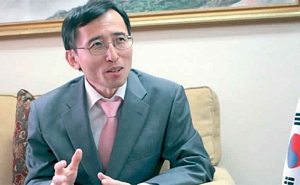 Trade between Qatar and South Korea would reach about 30 billion dollars by the end of 2014, HE South Korea’s Ambassador to Qatar Chung Keejong said.

The Ambassador said that his forecast is backed by South Korea’s recent implementation of new economic growth engines that specifically underscores the role of the SME sector, which could complement Qatar’s diversification from the hydrocarbon industry.

“Qatar’s development of its small and medium enterprises sector is vital to achieve these goals towards economic diversification, including the development of programs and policies that support the growth of SMEs,” the Ambassador said during the 2014 Korea-Qatar Business Networking Meeting with the Qatar Chamber held yesterday at the St Regis Hotel Doha.

“These are expected to be strong catalysts for Qatar’s economy, making it an attractive venue to pursue business opportunities,” he added.

For his part, Vice Chairman of Qatar Chamber Mohammad bin Tawar Al Kuwari said that trade and economic exchange between Qatar and South Korea is growing steadily in all sectors. The annual trade exchange between the two countries amounts to more than 20.5 billion dollars.

He said that relations between Qatar and South Korea have seen remarkable progress over the past years. The year 2014 is 40th anniversary of the establishment of the diplomatic relations between the two countries, which began in 1974.

Qatari exports to South Korea represented by oil and gas which meet 30 percent of the energy sector needs in Korea, while Qatar’s imports from Korea are mainly automotive and electronics, he noted.

There are 16 Korean companies operating in different areas of the state, he said, hoping that the meeting would result in constructive partnerships. Al Kuwari said that Qatar is keen to see Koreans taking part in mega projects in the country, and that Qatari businessmen are interested in exploring investment opportunities in Korea in all sectors.