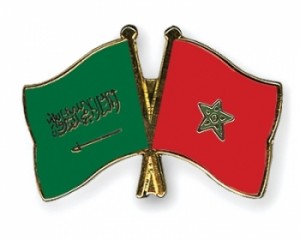 Secretary General of the Saudi Export Development Ahmed bin Abdulaziz Hagbani said that the volume of trade exchange between the Kingdom of Saudi Arabia and the Kingdom of Morocco amounted to about 10.7 billion riyals, or the equivalent of 2.84 billion dollars, in 2012.

Hagbani’s remarks came in a press statement on the occasion of the first session of the “Forum of the Two Kingdoms” in the city of Casablanca, Morocco, on Wednesday.

He indicated that the Kingdom’s imports from Morocco exceeded 540 million riyals, while the value of Saudi exports to Morocco reached 10.1 billion riyals.

He explained that the balance of trade between the two countries has tilted in favor of the Kingdom of Saudi Arabia since 2003 and was in the year 2012 more than 9.5 billion riyals.

In his statement on the occasion, Hagbani highlighted Saudi-Moroccan strong relations and cooperation in various fields.

About 300 Saudi businessmen and investors will participate in the activities of the Saudi-Moroccan forum to discuss ways to overcome the difficulties faced by exports between the two countries.

The forum will also discuss ways of developing Saudi-Moroccan trade cooperation for the development of bilateral trade and investment as well as discuss joint projects and open new markets for both sides.