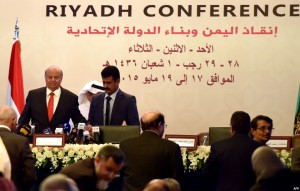 As he received Dr. Al Jaber, President Hadi hailed the UAE’s supporting stances for the legitimate rights of the Yemeni people and their rejection of the coup against Yemen’s constitutional legitimacy and foreign interference in the country’s internal affairs, as well as the need for reinstating the legitimate institutions, establishing stability and building a modern state.

Minister Al Jaber said the directives of the UAE leadership on Yemen are based on consistency between Yemen and other Arab states that materialised during the Gulf Cooperation Council’s (GCC’s) initiative.

The solution in Yemen, he explained, should be based on the outcome of Yemen’s national dialogue and international legitimacy reflected by UN Security Council Resolution 2216.

He noted that it is necessary to implement the decisions of the Riyadh Conference in order to lay a solid foundation for a modern state, bringing the armed conflict to an end, and removing militias and any armed groups from all the country’s cities including the capital Sanaa, and initiating measures for national reconciliation.

Dr. Al Jaber said the UAE is keen on restoring constitutional legitimacy in Yemen, bringing conflicts to an end and establishing stability, the main factor that allows for concentrating efforts on economic and social development.

The three-day Riyadh conference, which brought together delegates from the GCC countries, different Yemeni factions and representatives of the G14 group of ambassadors, ended Tuesday with a declaration that called for the formation of special forces to protect Yemen’s cities engulfed in the fighting.