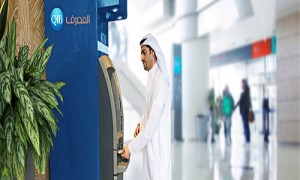 Qatar Islamic Bank (QIB) has been recognized for the first time as the “Bank of The Year -Qatar 2015” by The Banker magazine– the World’s longest running international banking title and the leading monthly title of the Financial Times Group, as part of their Bank of the Year Awards 2015.

The selection process was based, among other factors, on an institution’s progress in the preceding year, and reflects QIB’s outstanding growth and development. The Bank of the Year awards ceremony was held in London recently and the award was presented to Bassel Gamal, QIB’s Group Chief Executive officer.

This outstanding overall growth, along with its many technological, community- and customer-oriented initiatives, was a key factor in the Bank’s success at The Banker – Bank of the year Awards 2015. In a letter to QIB management, FT Financial publisher said: “The aim of the awards programme is to reward and promote industry wide excellence in the global banking community.” He continued, “The Banker’s judging panel felt that QIB made the most progress over the 12 months; something which is not only in terms of the bank’s strong financials, but also in the wide range of initiatives which the bank undertook during this period. This awards recognition, by the world’s longest running international banking title, is testament to the strong management, sound business model and strategy of QIB.” “The recognition of being named “Bank of the Year 2015″ in Qatar is a testament to the collective efforts of all the Bank’s staff, support from all stakeholders and the Board of Directors, our clients’ trust, a sound business model and our commitment to continuous improvement.” Mr. Gamal concluded. Recently this year, QIB was also recognized as the Islamic Bank of the Year 2015 in the Middle East, as well as – for the third year in a row – being awarded ‘Islamic Bank of the Year’ in Qatar by The Banker magazine, making QIB the first and only Bank in the world that get recognized across both categories’ awards in the same year.

QIB was also recognized in The Banker’s annual comparative ranking of banking brands. The ranking highlighted QIB as the fastest growing financial brand in the world, with its brand value rising 91% over the previous year, making the Bank one of the top 50 most valuable brands of all industries in the MENA region. Read in over 180 countries around the world, The Banker – which has been providing global financial intelligence since 1926 and is the world’s longest running international banking title and the leading monthly title of the Financial Times Group – is the key source of data and analysis for the industry.