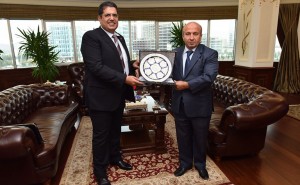 HE the Minister of Environment Ahmed bin Amer Al Humaidi said that desertification and drought waves around the globe since the seventies of the last century, had left human and environmental losses more than hurricanes, floods and earthquakes that have occurred at the same period.

Speaking at the 12th session of the conference of the parties to the UN Framework Convention to Combat Desertification (UNCCD),being currently held in Ankara, HE the Minister said that there are 168 countries around the world suffering from implications of desertification and drought, including soil degradation, vegetation , the acquisition of demographic and urban growth on a large part of the agricultural areas as well as low of groundwater storage due to a shortage of rainfall.

His Excellency noted that the climate changes are doubling of risk of food insecurity, which affects more than 800 million people, mostly citizens of dry land states, where approximately live one-third of the world’s population.

On the integrated policy adopted by Qatar in addressing environmental and climatic challenges, he said that it was based on the increase in natural reserves , maintaining the vegetation, increasing green spaces and preservation of biodiversity and introduction of modern technologies in agriculture to reduce depletion of groundwater.

Al Humaidi stressed the need for regional and international cooperation to strengthen domestic policies and plans to counter climate change and food insecurity, stressing that any country and whatever its means and potentials , cannot alone face the serious consequences of climate change, particularly the desertification, drought and food insecurity , a matter which requires common challenges and common solutions.

In this context, HE the Minister said that the initiative of HH the Emir Sheikh Tamim Bin Hamad Al -Thani, to establish Global Dryland Alliance came to complement the relevant international organizations’ efforts, pointing out that coordination and consultation had been made with a large number OF international organizations ,bodies and funding and research partners to prepare , enrich and review the foundational texts of the Global Dryland Alliance .

HE the Minister extended invitation to all concerned countries to support and join the Global initiative, during the conference, which is expected to be hosted by Qatar next year to sign the founding treaty of alliance as an international organization for food security.

Meanwhile, HE the Minister held a series of meetings with a number of heads of delegation and organizations participating in the Ankara conference such as the Executive Secretary of the United Nations Convention to Combat Desertification (UNCCD) , Ministers of Environment and Agriculture of Turkey, Benin, Niger, Guinea, Namibia along with writer of the French State in charge of development in addition to a number of representatives of regional and international bodies concerned with the initiative of Global Dryland Alliance .

Heads of delegation and organizations have praised the initiative of HH the Emir and the pioneering role played by Qatar at international forums concerned with climate change, food security and sustainable development.

They confirmed their countries’ welcome and support to the initiative and their willingness to join and make partnership with it to achieve food security for dryland countries thereby contributing to the promotion of international peace and security through the eradication of poverty and hunger.

On the sidelines of the conference Al Humaidi met with Turkish Minister of Food, Agriculture and Livestock Kutbettin Arzu in presence of HE Qatar’s Ambassador to Ankara Salem bin Mubarak Al-Shafi.

Talks during the meeting focused on cooperation between the two countries in the areas of agriculture, food security , livestock production and topics of mutual interest.