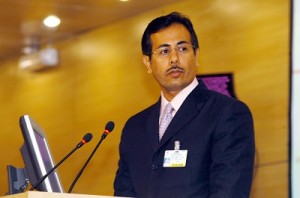 HE the Minister of Economy and Commerce Sheikh Ahmed bin Jassim bin Mohammed Al-Thani held here on Sunday separate meetings with German Federal Foreign Minister Dr. Frank Walter Steinmeier, Chad’s Minister of Economy, Trade and Tourism Development Aziz Mahamat Saleh and Irish Minister for Trade and Development Joe Costello.
During his meeting with Steinmeier, talks focused on exchange of views and aspects of cooperation between the two countries, especially in economic, trade and investment fields and ways of enhancing them.
The volume of trade exchange between the State of Qatar and the Federal Republic of Germany amounted to QR 6.9 billion in 2013.
During his meeting with Chad’s Minister of Economy and his accompanying delegation, who is currently visiting Qatar, the miniter received an invitation to the State of Qatar to participate in the conference to be held by Chad in Paris this month as part in a fund-raising conference for the national development plan for the years 2013-2015 and the national program for food security.
HE the Minister of Economy and Commerce’s talks with the Irish Minister for Trade and Development dealt with dealt with bilateral relations between the two countries and aspects of joint cooperation, particularly in economy, trade and investment domains and ways to further develop them.
The volume of trade exchange between the two countries amounted to QR 371 million in 2013.