Qatar Chamber to Hold Consultative Meeting with HE Prime Minister 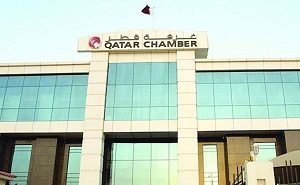 Qatar Chamber to Hold Consultative Meeting with HE Prime Minister

Qatar Chamber of Commerce and Industry announced Saturday it will hold the sixth consultative meeting with HE Prime Minister and Minister of Interior Sheikh Abdullah bin Nasser bin Khalifa Al-Thani.
A statement released by the chamber today said that the meeting has become a regular events that deals with the aspirations of the private sector in the country. It also sheds light on the status of partnerships between the public and private sector.
Vice Chairman of Qatar Chamber of Commerce and Industry Mohamed bin Ahmed bin Tawar said the meeting is a golden opportunity to discuss activating the role of the business sector in the community. He added that the speech of HH the Emir at the opening of the Advisory Council’s 43rd Ordinary Session provided a boost to the Qatari business sector in continuing its role in enhancing the national economy.
He praised HH the Emir’s keenness on having the private sector as the main partner in development. Bin Tawar also praised the government for preparing legislations to improve the business environment in the country.