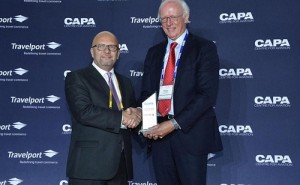 Qatar Airways was named Asia Pacific Airline of the Year at the 2015 CAPA Aviation Awards for Excellence held in Singapore.

Qatar Airways Group Chief Executive, Akbar Al Baker, said: “To be named CAPA Asia Pacific Airline of the year rounds off a big year of award wins for Qatar Airways. It is truly an honour when our efforts and accomplishments are recognised by our peers for they know what it takes to be an industry leader. We have made great strides in consolidating our leadership in the aviation business this past year, and much of the credit goes to the entire team at Qatar Airways who bring our award-winning product and service to life each and every day.” Qatar Airways Senior Vice President South East Asia and South West Pacific, Marwan Koleilat, accepted the award on behalf of the airline in Singapore.

The CAPA Asia Pacific Airline of the Year award was given to the airline that has been the biggest standout strategically during the year, has had the greatest impact on the development of the airline industry, established itself as a leader, and provided a benchmark for others to follow.

Qatar Airways was selected by the judging panel for its remarkably fast expansion and rapid emergence as a global leader. “Qatar Airways has pursued rapid growth over the last year, launching over 10 new destinations and adding capacity to numerous existing destinations,” said CAPA Executive Chairman Harbison. “Other milestones from 2014 included moving to a new hub airport in Doha, taking delivery of its first A380 and becoming the launch operator of the A350.” Qatar Airways Senior Vice President South East Asia and South West Pacific, Mr. Marwan Koleilat (left), accepting the award for Asia Pacific Airline of the Year on behalf of the airline at the 2015 CAPA Aviation Awards for Excellence.

Now in its 13th year, CAPA’s Aviation Awards for Excellence are intended to reward airlines and airports that are not only successful but have also provided industry leadership in an always changing environment.

Award candidates were independently researched and short-listed by a team of analysts at CAPA Centre for Aviation and by partners at Heidrick & Struggles. Winners were then selected by an independent and separate panel of judges.