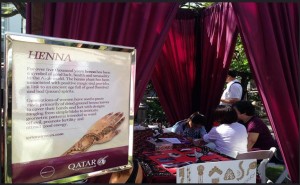 Thousands of Los Angeles residents turned out to enjoy the “Discover Qatar Airways” pop-up event, hosted throughout the weekend at The Grove.
The unique event celebrated the upcoming daily, non-stop service between Hamad International Airport in Doha and Los Angeles International Airport (LAX), scheduled to commence on January 1st, 2016. Guests of all ages enjoyed a luxurious Qatar Airways experience from start to finish, including an award-winning Business Class seat display, Arabic food tastings, and musical entertainment from around the world.
“In advance of the launch of our services to LAX beginning on January 1st, we chose to provide Los Angeles residents with a taste of our five-star service and amenities” said Qatar Airways Group Chief Executive Akbar Al Baker. “The response has been incredible and Los Angeles residents have been very welcoming. It is very important for us to engage with all the local communities that we serve and showcase our award-wining hospitality and provide them with a taste of Qatar Airways”.
Guests at The Grove enjoyed testing out the Business Class seat, sampling cuisine from the award-winning inflight menu and experiencing the renowned hospitality of Qatar Airways. The national airline of the State of Qatar also used the event to highlight its diverse network of 152 destinations around the world. Arabic, African and Bollywood dance routines were among the highlights and children enjoyed henna art, mosaic box crafting, a coloring wall and Instagram-ready photo booth. On Friday evening, the airline also hosted a VIP reception, featuring a live performance by Judith Hill, a stand-out contestant on NBC’s “The Voice”.
Throughout the weekend, Qatar Airways also gave out lavish prizes, including Economy and Business Class tickets and even passes to Z100’s sold-out Jingle Ball. LA social media was abuzz with the popular “Spot the Qrew” contest, where LA residents had to search for and find Qatar Airways cabin crew members around the city, using clues on Facebook and Twitter. Lucky followers received round-trip tickets on the airline to any destination in the network.
In addition to launching a daily service between Los Angeles International Airport (LAX) and Doha’s Hamad International Airport (DOH) on January 1st, 2016, Qatar Airways will be opening new U.S. gateways in Boston on March 16th and Atlanta on June 1st, 2016. The airline is already preparing similar pre-launch events in both cities, after the success and overwhelming popularity of the LA event.