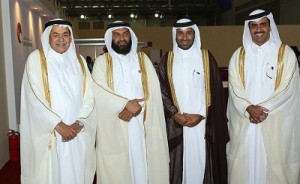 Members of Qatar’s delegation to the 15th GCC Joint Exhibition have highlighted the importance of building constructive partnerships between GCC states in order to boost the growth of their economies.

Speaking to QNA on the sidelines of the Sharjah-based event, the members said that establishing these partnerships can only be achieved through participation in joint events.
Qatar Chamber board member Dr. Mohamed bin Jawhar Said Al-Mohamed underlined the significance of the event as a way of achieving commercial and economic cooperation between GCC states and the whole world.

He added that such exhibitions resulted in increasing imports and exports among GCC states and new industries were introduced to them by bringing knowledge from different parts of the world.
Al-Mohamed said Gulf states have recently become capable of competing with many world countries as evidenced by Qatar’s winning bid to host the 2022 World Cup and UAE’s victorious bid to stage EXPO 2020.

For his part, Qatar Chamber board member Khalid Jabor Sultan Tawar Al Kuwari said the participation of Gulf states in the 15th GCC Joint Exhibition is good for product marketing especially that everyone can manufacture but they may find it difficult to market and sell these products, which, he added, highlights the significance of the event.

In turn, board member Rashid Nasser Sraiya Al Kaabi said the exhibition, as one of the mechanisms of facilitating communication between companies and consumers alike, is a good opportunity for boosting businesses among GCC states.

He expressed hope the event will result in public and private sector partnerships that would benefit GCC economies, noting that such partnerships shouldn’t be limited to GCC states but go beyond that to include world countries.