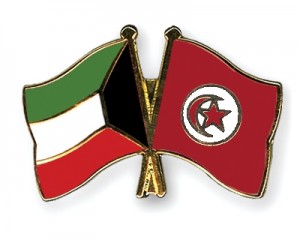 The delegation of Kuwait Chamber of Commerce and Industry (KCCI), led by Chairman Ali Mohammad Al-Ghanem, and the Tunisian Union of Industry, Trade and Handicrafts (UTICA), chaired by Wedad Bushmawi, agreed to boost economic, commercial and investment cooperation.
Addressing the KCCI-UTICA joint session on Friday, Al-Ghanem said the Kuwaiti investments in Tunisia are the Arab largest, most stable, most sustainable and most diversified investments.
“The current visit of the KCCI delegation aims to open a new stage in economic cooperation between the two sisterly countries,” said Al-Ghanem who met with Tunisian President Moncef Marzouki and Prime Minister Mahdi Jomaa last night.
“This new stage will see not only larger and more reassuring investments but also an integrated strategy that envisages a more effective role of industry and commerce in economic cooperation to serve the interests of both sides,” Al-Ghanem pointed out.
“The State of Kuwait attaches great importance to its overseas investment which turned to be the second largest source of national income after oil,” he noted.
Al-Ghanem called on the Tunisian side to facilitate the procedures relating to foreign investment through cutting red tape and draw up viable, feasible and well-planned projects.
He promised to present such projects to Kuwaiti public and private investors and convince them of taking part in the implementation of the projects.
On her part, Bushmawi promised to coordinate with the Tunisian government for removing the obstacles facing the foreign direct investment (FDI) and the Kuwaiti investment in particular with regard to customs and taxes.
She called for boosting the trade exchanges and making the economic ties as special as the political ones.
Meanwhile, Kuwait Ambassador to Tunisia Fahad Ahmad Al-Awadhi said the KCCI delegation is the second Kuwaiti business delegation visiting Tunisia in less than a week after the visit of Kuwait Investment Authority (KIA) delegation on May 22.
“The current visit signals the genuine desire of the political leaders of both countries to strengthen the economic, commercial and investment ties,” said Al-Awadhi in an address to the session.
He expressed confidence that the visit exchanges on different levels particularly in the economic sector will further strengthen the already deep-rooted bilateral ties and serve the common interests.
A number of Tunisian cabinet members who attended the session pledged to improve the investment atmosphere in their country and facilitate the measures relating to their respective ministries.