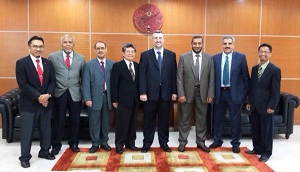 The Kuwaiti Embassy here hosted two official delegations from the National Fund for Small and Medium Enterprises (SME) Development and the National Bureau for Academic Accreditation and Education Quality Assurance (NBAQ) to review the Malaysian experience in these two fields and whether Kuwait could implement some of the measures proven to be productive.
Executive Chairman and Secretary General of the National Fund for Small and Medium Enterprises (SME) Development Dr. Mohammad Al-Zuhair told KUNA “the visit aims to benefit from others’ experiences to guide the fund as it draws its strategy and working plan for the next five years.” This is important for the fund, which is an independent public institution set up just last year, he noted.
Al-Zuhair pointed out, “our delegation held several meetings with officials from Malaysia’s fund for finance of small and medium enterprises, established some 10 years ago, and reviewed the governmental body’s policies, the difficulties it had to overcome, and its future plans. “We in Kuwait hope to start where the others have reached so far,” he noted.
On bilateral agreements, the official said there would be discussion on signing agreements in the future with the many Malaysian institutions in this field.
As for the second delegation’s visit, Deputy Director General for Academic Accreditation at the National Bureau for Academic Accreditation and Education Quality Assurance (NBAQ) Dr. Muthanna Al-Rifaei told KUNA it aims to verify that accredited universities and educational institutions still meet criteria and maintain quality of education required through their programs.
“NBAQ would be drawing a list of Malaysian educational institutions that are accredited by the Kuwaiti authorities to guide would-be Kuwaiti students,” the official revealed.
NBAQ was created through an Amiri Decree in 2010 with the aim of assessing universities abroad and whether to allow Kuwaiti students to seek BA or higher certificates.
“Such visits open up communications channels with universities and with those in charge of educational programs in Malaysian educational institutions to make sure Kuwaiti students would get certificates that would be recognized back home. They also provide opportunity to include more institutions on the list to give the students more options.” The Kuwaiti educational delegation visited the Malaysian Qualifications Agency to review its mechanisms and the scope of programs it accredits. The MQA is a statutory body, set up under Malaysian Qualifications Act 2007, to accredit academic programs provided by the country’s educational institutions.
The Kuwaiti Ambassador to Malaysia Saad Al-Asousi hosted the members of the two delegations to a dinner banquet where the guests included accredited ambassadors of the Gulf Cooperation Council (GCC) countries in Malaysia.