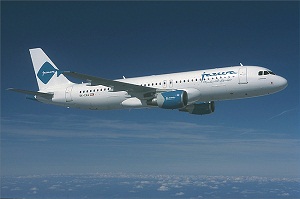 Jazeera Airways Chairman Marwan Boodai said here on Satuday his company was holding talks with leading makers for buying a new generation of aircraft.
The contract between Jazeera Airways and plane manufacturers will be announced by the end of this year, Boodai said in an exclusive interview to KUNA as the airline has recently got delivery of a new A320s.
The company finances the buying of new airfraft through Kuwaiti and international banks without any governmental guarantees, he said, adding that Jazeera Airways is keen to update its fleed of planes.
He said the airline plans to keep new aircraft for only five years before offering them for renting, noting that it represents the Kuwaiti private sector which has proved ability to build world companies at home with the help and support of the Kuwaiti government.
However, Jazeera Airways does not believe in governmental financial support, the chairman of the Kuwaiti private airline pointed out.
Jazeera Airways Group had got delivery of a brand new Airbus A320 aircraft, bringing the Group’s fleet to 15 fully-owned aircraft.
Jazeera Airways is the largest airline serving the Middle East out of Kuwait. It currently serves 19 destinations across the Middle East and operates a modern fleet of Airbus A320 aircraft.
Established in April 2004, Jazeera Airways was first non-government owned airline in the Middle East and continues to be one of the few Middle-East based non-government owned airlines to this day. Today, Jazeera Airways is a publicly-traded company and is listed on the Kuwait Stock Exchange (KSE).