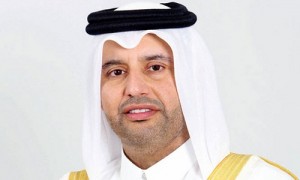 HE Minister of Economy and Commerce Sheikh Ahmed bin Jassim bin Mohamed Al-Thani received on Thursday a written message from Mohamed Ali Soilihi, the Comoros vice president in charge of the ministry of finance.
Mohamed Ismail, Soilihi’s envoy to the Gulf and Comoros ambassador to Saudi Arabia, handed the message as he met with Sheikh Ahmed bin Jassim today.
During the meeting, the two sides reviewed economic, commercial and investment ties between the two countries and means of enhancing and developing them.