GCC States Made Big Strides in Transport and Communications 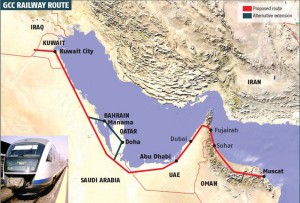 HE the Minister of Transport Jassim bin Saif Al-Sulaiti said GCC states have made big strides in the field of transport and communication foremost of which being work for the establishment of Gulf railways to play the aspired role through coordination among member states and to draw up the appropriate regulations to operate the railway network.

The ministers remarks came in a speech he gave at the 19 meeting of GCC transport ministers, opened here Thursday under his chairmanship.

He explained that the GCC has adopted may significant resolutions in the economic field that pushed the joint action many steps forward, adding that the GCC drive made advanced stages towards integration and attainment of the objectives stipulated in the GCC statute, thanks to the shrewd vision of GCC leaders.

HE Al Sulaiti said the recent years have seen a quantum leap towards joint action in various fields, the achievement of many positive results,successes and the adoption of a balanced method in the realization of the comprehensive development to enhance economic integration among all GCC countries.

Those plans include the link up of GCC states with a network of highways and the diversification of transport options of people and goods for nationals and beneficiaries in GCC states, Al Sulaiti said.

He noted that conviction and keenness of GCC on the importance of investment in joint projects among GCC states, has led to the launch of many transport projects, foremost of which being the establishment of a railway network due to its positive impact on the flow of inter-trade and freedom of citizens movement.

Al-Sulaiti added that as joint investments among GCC states are viewed as a basic supporters of their economies, GCC leaders decided at their 24th session in December 2003 to assign transport ministers to conduct a feasibility study of the establishment of a railway network that links up GCC states and contribute to the enhancement of their economic development, explaining a study to this effect had been conducted with its outcome found that the project is economically feasible and decided at their 30th meeting in December 2009 that the GCC railway network protject should move towards the phase of the preparation of detailed studies of the project including the engineering designs and the study of the establishment of a GCC railway authority to supervise the project and the coordination among member countries to this effect.

The GCC Transport Ministers Committee has been assigned to intensify work to implement that important project as early as possible according to the best international specifications, Al Sulaiti said.

He stressed that maritime transport is no less important than land transport as it supports inter-trade and enhances international navigation, hoping that all bodies would work with full energy to adopt all resolutions in order to enhance cooperation in this field.

Our meeting assumes great importance as it will discuss the recommendations of the GCC transport ministers’ 18th meeting, held in Kuwait on 15 October 2014 to set priorities and find means and mechanisms for the implementation of those recommendation so as to benefit from them in developing the transport and communications sector in GCC states, Al Sulaiti said.

Concluding, HE the Minister of Transport expressed hope that the ministers’ efforts would achieve success to realize coordination and integration in transport and communications sector to attain the good of citizens and their aspiration for a better future.

For his part, GCC Secretary-General Abdullatif bin Rashid Al Zayani expressed deep thanks to HH the Emir and Chairman of the current session of the GCC Supreme Council Sheikh Tamim bin Hamad Al-Thani, government of the State of Qatar and the Qatari people for their highly appreciated efforts in the GCC joint action and their support and care for the realization of GCC citizens’ aspirations for further cohesion and integration, wishing the Qatar people further progress and development.

Addressing the meeting, Al Zayani explained that participants will discuss a number of memorandums on the follow-up of the GCC railway project, the important project which the GCC Supreme Council called for its early implementation as a pioneering and strategic project related to the economic development drive.

Concluding, Al Zayani praised the distinguished efforts made by the GCC transport and communications ministers and members of other committees to prepare for the ministerial committee, praying the Almighty Allah that their good efforts and endeavours would be successful.