The club only managed to open accounts through midfielder Cesc Fabregas’s header inside the penalty box in the 34th minute.

The national side dubbed ‘Harimau Malaya’ however equalised the score line through Amri Yahyah’s stunning strike in the 40th minute, earning loud cheers from the more than 45,000 spectators at the stadium.

Two minutes later, the Spanish club was back in front through their Brazilian import striker, Neymar who tucked in an effortless goal from close range.

After the break, Gerardo Martino’s side continued to pile pressure on Malaysia and managed to score the third goal courtesy of Gerard Pique’s powerful shot inside the penalty box in the 74th minute.

National head coach Datuk K. Rajagobal made a few changes in his formation in the second half as the team sought their next goal but they failed to break Barcelona’s defence.

Meanwhile, Pique was selected as the man of the match.

The win is the second for FC Barcelona in their 2013/2014 Asian Tour after having whipped the Thai national team, 7-1, in Bangkok last Wednesday. 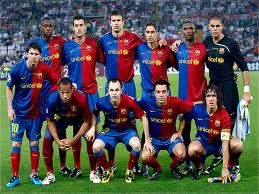