Emirates NBD named Bank of the Year twice by The Banker 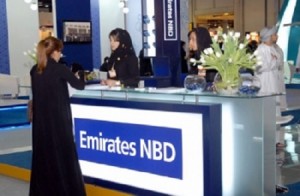 The Emirates NBD today announced that it has been named ‘Bank of the Year – UAE 2015’ by The Banker. The award, considered among the most prestigious by the global banking community, recognise Emirates NBD’s strong financials and pioneering approach to innovation in digital banking.

In awarding the top regional and UAE titles to Emirates NBD, The Banker stated that “Emirates NBD has pursued an almost peerless approach to digital and technological innovation over the past 18 months. This strategy has positioned the bank not only as regional leader but as one of a handful of lenders globally that can lay claim to being a pioneer in the development of new technology.”

Shayne Nelson, Group CEO, Emirates NBD said, “We are honoured to be recognised by a prestigious institution such as The Banker as the best bank in the UAE as well as being the first in the UAE to win best bank in the Middle East. Over the years, we have made smart investments in technology innovation and operations to transform the customer experience across retail and corporate divisions as well as introduce banking solutions that have put us at par with some of the most advanced banks globally. We are pleased that our efforts have yielded in industry-wide recognition as we continue to set benchmarks amongst our peers.”