DME named “Asia Exchange of the Year” by Energy Risk 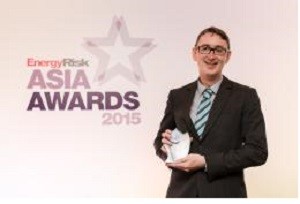 The Dubai Mercantile Exchange (DME), the premier international energy futures and commodities exchange in the Middle East, was named “Asia Exchange of the Year” at the 8th Energy Risk Awards Asia 2015, which took place last night in Singapore.

The Energy Risk Awards recognise excellence across the energy and commodities markets, as well as celebrating companies that have had a particularly successful year. The winners of the Energy Risk awards were determined by editorial choice after a rigorous pitch submission and interview process. The judges paid particular attention to first-hand feedback from clients.

Owain Johnson, DME’s Managing Director, said, “DME is delighted to win this prestigious award, which is a recognition of the DME team’s hard work in developing the Oman futures contract to provide companies around the world with the best and most transparent environment in which to trade Middle East crude oil. Every day, around 90 firms contribute to DME’s price formation process ensuring that our regulated platform provides fair pricing for oil heading to Asia.”

DME has established its Oman Crude Oil Futures Contract as the most credible crude oil benchmark in the East of Suez market. As a fully regulated exchange, DME offers a fair price discovery mechanism and a transparent trading environment for Middle East oil exports. DME enables a broad range of industry players to participate in the pricing process and no single participant accounts for more than around 10% of DME pricing activity.

Over the past year DME has focused on creating a more efficient and cost-effective trading environment for its customers. The Exchange introduced a new trading mechanism, Trade at Marker (TAM), as well as accepting for the first time Letters of Credit (LCs) from Singapore and Japan. DME also recently launched “DME Auctions” – a new platform that will provide a transparent spot commodity auction system for the first time in the Middle East.