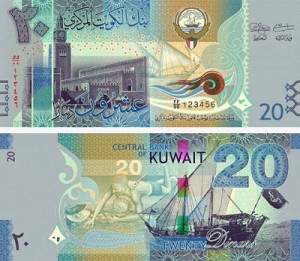 The Central Bank of Kuwait (CBK) is set to launch the new sixth issue of Kuwaiti banknotes as of June 29, CBK Governor Dr. Mohammad Al-Hashel announced here on Monday.
“The new issue will be in circulation from June 29, 2014,” Al-Hashel said at a celebration held on the occasion in presence of senior officials of concerned state bodies and agencies.
The usage of the fifth banknotes shall run in parallel with the new banknotes until withdrawal of current banknotes is completed, he added.
The new banknote issue reflects the CBK’s sincere efforts to keep pace with the state-of-the-art technology used in the industry of banknote-printing and improvement in the signs and security specifications therefor, Al-Hashel pointed out.
The new sixth issue uses the Kuwaiti flag as an inspiring artistic base for all new banknotes to illustrate and promote the national identity, he added.
Arguably the most familiar and iconic Kuwaiti landmark, the Kuwait Towers are illustrated on the banknote’s front as they soar mightily into the sky. The banknote’s backside alludes to Kuwait’s marine life and the significance of preserving it such as the endangered hawksbill sea turtle and the silver pomfret (Al Zubaidi), Kuwait’s most popular fish.
The striking Liberation Tower, a massive 372-meter structure that is one of the main landmarks in Kuwait City as well as one of the tallest buildings in the world, appears on the front side of the banknote as a symbol of Kuwait’s independence since its erection in 1996. The banknote’s backside portrays a traditional wooden Kuwaiti door, a plaster carving and the first Kuwaiti coin used locally.
With its powerful pyramid steel structure, the Central Bank of Kuwait’s newly constructed building portrayed on the banknote’s front side represents the Bank’s objectives of ensuring resilience, stability and a sound monetary policy.
The back of the banknote shows off one of Kuwait’s oil refineries and a tanker as a testament to Kuwait’s precious source of prosperity.
A superb illustration of the Grand Mosque, the largest mosque in the country as well as a symbol of Kuwait’s Islamic identity, is portrayed on the banknote’s front.
The backside of the banknote displays a real-life illustration of an iconic column, one of the many influences of ancient Greece’s civilization that swept across and settled in Kuwait’s island of Failaka.
On the front side of the banknote appears the illustrious Seif Palace, a symbol of sovereignty and ruling power to all of Kuwait’s erstwhile rulers where the country’s affairs are administered.
The Boom, the largest and most popular traditional Kuwaiti dhow, is featured on the backside of the banknote, an element that alludes to Kuwait’s modernization as well as its rich economic and commercial history that is linked to the deep blue seas. Another element included on the back is a pearl diver, one of the earliest professions that enabled Kuwaitis to earn a living before the discovery of oil.
The glorious Kuwait National Assembly Building, a symbolic pillar of Kuwait’s democratic constitution, is beautifully illustrated on the front side of the banknote. Kuwait’s diverse desert life takes over on the banknote’s backside; a captivating illustration of a falcon oversees a seated camel dressed regally in a traditional sadu saddle.