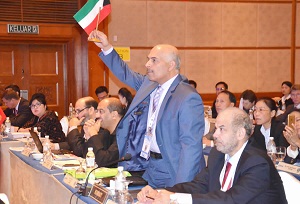 The Asian Organization of Supreme Audit Institutions (ASOSAI) has elected members of its executive board for the 2015-2018 mandate.
In remarks to KUNA, Ismail Al-Ghanem, Kuwait Audit Bureau’s undersecretary, acknowledged that Kuwait was “unfortunate” in the voting, however he applauded the Kuwaiti delegation’s active participation in the polling, which had been forecast to conclude in the first round, but the election proceeded for three rounds.
“Members of the Kuwaiti delegation played the required role during the general assembly, rallying support from the participating states, but were unlucky, coming seventh in the results,” he said.
Kuwait previously gained a membership in ASOSAI’s Executive Council for a period of six years. The board plays a key role in setting the organization’s plans and strategies.
Al-Ghanim said a sideline seminar tackled employment of technology for financial analysis, governance, hazards and commitment. A Kuwaiti exhibition held on the occasion displayed various publications, particularly those issued by the Audit Bureau.
AOSAI’s general assembly kicked off here on Tuesday with participation of Kuwait’s Audit Bureau, a member since 1984.