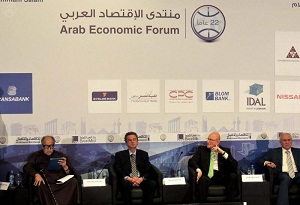 The 22nd annual Arab Economic Forum has kicked off here Thursday, with a Kuwaiti participation alongside a large audience of business leaders, economists, bankers, experts and media organizations from Lebanon and the Arab region.
The forum is being held under the patronage of the Lebanese Prime Minister Tammam Salam who opened his speech by stressing the importance of the security and stability of his country amidst unrest in the region.
He added that some of the Arab economies, especially those of the Gulf region, were able to leave an imprint on the world economy. He expressed gratification to the countries of the GCC for standing with Lebanon and its people by securing its economic stability.
Salam’s address also focused on Lebanon’s gas and oil findings that would provide investment opportunities locally, regionally and internationally.
The Kuwait delegation to the event includes Director of Kuwait Direct Investment Promotion Authority Sheikh Dr. Mishal Jaber Al-Ahmad Al-Sabah, MP Yousef Zalzalah and former Minister of Finance Bader Al-Humaidi and Director of Arab Planning Institute Dr. Bader Mallah. The Forum is held on the 19th and 20th. The main topics of the forum include: the crisis of democratic rule and the parliamentary system in the region, the economic outlook for Arab spring countries, youth unemployment as a destabilizing factor and long term threat, Arab banks and the onset of Basel III, Arab Central Banks and post crisis regulatory policies and Prospects and potential financial impact of Lebanon’s oil and gas findings.