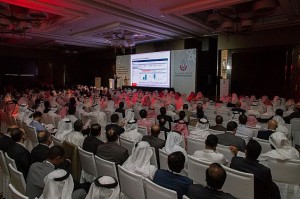 The Department of Finance – Abu Dhabi, DoF, announced during GITEX Technology Week 2015 that 40 local government entities are now connected to the Abu Dhabi ERP system, ADERP, as of September 2015.

The department is expecting to complete the implementation of the system across all government entities by the end of the first quarter of 2016. The department is also working on applying the system via mobile phones to include both human resources and suppliers’ services.

The ADERP system, with more than 25,000 users, is an integrated financial system and a financial framework designed to facilitate the preparation and implementation of the general budget, providing government entities with 25 ADERP system modules. These modules facilitate the preparation of reports, the consolidation of financial statements and the integration of subsystems such as budget development, accounts, cash management, human resources, government assets, salaries and procurement, in addition to managing electronic tenders.

Salah Mohamed Al Weswasi, Executive Director of Policy and Financial Systems Sector at DoF- Abu Dhabi and Head of the ADERP technical committee, said, “The ADERP system is one of the most significant projects to be implemented by the Department of Finance – Abu Dhabi. The system strengthens the department’s ability to evaluate assets, liabilities and costs, and supports the auditing, transparency and analysis of public spending. It has also facilitated a shift towards the implementation of an accrual basis system across government entities, as opposed to a cash basis structure, and supported the implementation of a Treasury Single Account, which will promote greater transparency and raise the efficiency of government financial operations.”

He added, “The ADERP contributes in raising the efficiency of government and financial work, where it unified the financial systems of government entities and implemented the budget control policy. The ADERP system also represents significant cost-savings. The implementation of one unified platform costs 88% less than the investment required to develop and operate a different system across each government entity by taking advantage of the infrastructure”

Alongside the GITEX Technology Week 2015, Al Weswasi, on behalf of DoF- Abu Dhabi, received the 2015 Oracle Data Integration Solutions Award. The award, which was handed over by Abdual Rahman Al Thehaiban, Vice President of Oracle- Middle East and Africa, recognises the department’s efforts and excellence in implementing the ADERP system, specifically in its role in achieving DoF’s strategic goals.

DoF – Abu Dhabi has hosted two ADERP system user forums over the past two years, for specialists and employees from government entities across Abu Dhabi. The department has also implemented hundreds of training courses. These sessions have been held to facilitate an interactive platform for reviewing the latest developments and applications of the system, and to provide an opportunity for specialists and users to exchange expertise.