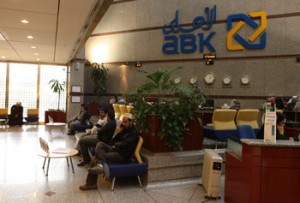 Ahli Bank of Kuwait (ABK) has announced net profits of KD 8.1 million USD 28.8 million) for the first quarter of 2014, up 15 percent over the same period last year.
ABK Board Chairman Ahmed Yousuf Behbehani said in a statement on Tuesday that ABK achieved a net profit of KD 8.13 million for the first quarter 2014, compared to KD 7.07 million in the corresponding period in 2013, representing a 15 percent increase.
Earnings per share (EPS) at 5 fils, return on assets (ROA) at 0.99 percent and return on equity (ROE) at 6.15 percent were ahead of the prior period performance of 4 fils, 0.96 percent and 5.55 percent respectively. The NPL ratio had reduced to 2.05 percent compared to 5.13 percent in the corresponding period in 2013. The Capital Adequacy Ratio (CAR) was 25.35 percent.
He said ABK managed to maintain its good performance and ability to achieve profits in spite of the stressful economic conditions. The growth ratio of 15 percent during the first quarter 2014 is an outstanding performance. ABK was also able to reduce its NPLs by half; from 5.13 percent during the first quarter 2013 to 2.05 percent during the corresponding period 2014.
Behbehani stressed that ABK has strong capital base and the Capital Adequacy Ratio of around 25.35 percent which enhance the Bank’s position and its ability to grow and provide necessary finance to the local and international companies inside Kuwait in addition to retail and corporate finance for the individuals and companies operating in the United Arab Emirates.
The Bank’s ability to maintain its credit ratings issued by international credit classification agencies such as Moody’s Investors Services, with stable outlook, enhances the confidence in the strong capital position of the Bank and its ability to avoid risks and achieve profits.
Further, the Chairman of the Board pointed out that the Bank continuously reviews and adjusts its strategy and improve the operational efficiency to cope with the developments of the financial markets. We are committed to provide high quality banking services to our customers and to employ high caliber banking staff who are well trained to provide best services to ABK customers.
As for his expectations about the economic situations during 2014, Behbehani said the economic conditions in the area are gradually improving, and the bank is looking forward to benefit from the economic opportunities by financing the state projects and increase its market share.