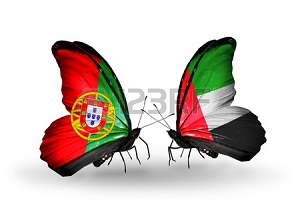 During the meeting, the two parties reviewed bilateral relations and ways to strengthen them. They also discussed the efforts of two countries to support the developing countries. They also exchanged views on a number of latest regional and international issues.

Sheikh Abdullah expressed at the joint press conference with the Portuguese Foreign Minister, his satisfaction about the progress of relations between the U.A.E. and Portugal, hoping that his current visit would further bolster them. He noted that the diplomatic relations between the U.A.E. and Portugal were established in 1976 and developed remarkably over the last 38 years, referring to the high-profile mutual visits of officials of the two countries.

The U.A.E. Foreign Minister underscored that the U.A.E. seeks to strengthen ties with Portugal and its friendly people, adding that the number of Portuguese residents in the U.A.E. was 30, 000 in 2013.

For his part, the Portuguese Foreign Minister welcomed Sheikh Abdullah and the delegation accompanying him, noting that the two countries enjoy distinguished relations, especially in the areas of economy, trade and investments. He referred to the regional and international status of the U.A.E., as well as the achievements attained by the U.A.E. in all fields.

The Portuguese Foreign Minister hosted a banquet in honour of Sheikh Abdullah and the delegation accompanying him. It was attended by the U.A.E. Ambassador to Portugal Saqr Nasser Al Raisi, who also attended the meeting.

Earlier Sheikh Abdullah visited The Calouste Gulbenkian Foundation, a Portuguese foundation of public utility whose statutory aims are in the fields of arts, charity, education, and science.