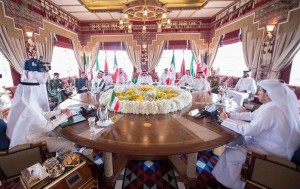 Dr. Abdul Latif bin Rashid Al Zayani, Secretary-General of the Cooperation Council for the Arab States of the Gulf, GCC, expressed his sincere congratulations and blessings to Their Majesties and Highnesses, the Leaders of the GCC countries and to the citizens of the members states, on the occasion of the 34th anniversary of the founding of the GCC, which falls on 25th May.

Al Zayani, in his statement yesterday, emphasised the pride and sense of belonging of GCC citizens to, “This great structure, and what it has attained in the way of outstanding achievements and comprehensive cooperation in various fields during its march.”

Al Zayani praised the insightful vision and strong determination of GCC leaders over the 34 years to build an integrated Gulf system and their finest efforts for the benefit of the welfare of GCC and all Arab and Islamic countries.