Ben Affleck to play Batman in ‘Man of Steel’ sequel

Actor Ben Affleck will play Batman in an upcoming Superman sequel that will see the two caped crusaders face off against each other, film studio Warner Bros Pictures said on Thursday. 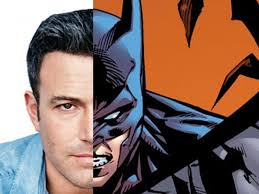 “We knew we needed an extraordinary actor to take on one of DC Comics’ most enduringly popular super heroes, and Ben Affleck certainly fits that bill, and then some. His outstanding career is a testament to his talent and we know he and Zack will bring new dimension to the duality of this character,” Greg Silverman, president of creative development at Warner Bros Pictures said.

The announcement that two iconic comic book heroes will face off against each other was made by Snyder earlier this year at San Diego’s annual Comic-Con, a convention celebrating comic-book and pop culture.

“It’s beyond mythological to have Superman and our new Batman facing off, since they are the greatest super heroes in the world,” Snyder said.

The director’s “Man of Steel” has been a successful reboot of the Superman franchise this year, making $650 million at the global box office. The yet-to-be titled sequel, slated for release on July 17, 2015, will reunite “Man of Steel” stars Cavill, Amy Adams, Laurence Fishburne and Diane Lane.

Affleck joins a list of actors who have donned Batman’s black mask and cape, including Michael Keaton, George Clooney and most recently Christian Bale in Christopher Nolan’s “Dark Knight” trilogy. Both Batman and Superman are part of the DC Comics universe, which is part of the Warner Bros Entertainment division, a subsidiary of Time Warner Inc.

Nolan’s “Dark Knight” films, which explored a darker and more complex portrayal of Batman, made more than $2 billion at the worldwide box office between 2005 and 2012, according to BoxOfficeMojo.com.

Affleck, who directed and starred in this year’s Best Picture Oscar winner “Argo,” will also be in upcoming gambling drama “Runner Runner,” opposite Justin Timberlake.