Women in Nuclear celebrated by ENEC

The region’s first organisation supporting the role of women in the nuclear industry has been honoured by the Emirates Nuclear Energy Corporation (Enec). The Women in Nuclear (WiN) chapter celebrated its first anniversary with two industry events, in Abu Dhabi and at Enec’s Barakah site in the western region where global nuclear experts attended. 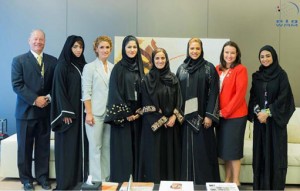 “I am extremely proud to be supporting the Enec WiN chapter,” said Sheikha Lubna Al Qasimi, Minister of International Cooperation and Development. “Developing women in such an important industry that will enhance the future social and economic growth of our nation is innovative as well as necessary,” she said.

“Women have an important role in communicating the benefits of nuclear energy and reassuring society on the facts about health and safety and the UAE’s commitment to ongoing development is recognised internationally as setting a high standard.”

Enec is witnessing an increase in female students on its Energy Pioneers scholarship programme. The future energy leaders will work on such projects as the operations of the UAE’s first nuclear power plant, expected to come online in 2017. Women make up more than 29 per cent of students in its educational programmes.

“To safely deliver a project of the scale and complexity of the UAE’s peaceful nuclear energy programme, takes a large and diverse team,” said Mohammed Al Hammadi, Enec chief executive. “I am proud that of our 1,400 employees today, over 21 per cent of these highly skilled professionals are female, more than the global average of just over 20 per cent for females in nuclear professions.”

Lady Barbara Judge, former head of the UK Atomic Energy Authority, said nuclear energy was one of the most important industries for the UAE.

“They’re building a world-class, gold-standard nuclear facility,” she said. “And they cannot afford not to use the best brains in the country, and one half of all the best brains in the country reside in its women. Women are a great natural resource, they’re very smart, they do very well in university and it is necessary to have these very smart people working on such important projects.”

Lady Barbara, a member of the International Advisory Board for the development of nuclear energy in the UAE, said the country, and Abu Dhabi in particular, had shown itself to be a leader in the world.

“By utilising its women in senior and serious roles, it will further emphasise its leadership in building an operating power plant by using the best and the brightest, not just in technology but also in brains.”