“Continued strong safety and operating performance combined with the significant savings delivered by our cost transformation initiatives are helping to mitigate the effects of the challenging market conditions.”

Total revenues declined 29% to AED 5.1 billion, while EBITDA was down 39% to AED 2.5 billion and net profit decreased 7% to AED 256 million compared to the same period a year ago. The effect of declining revenues and EBITDA on net profit was almost fully offset by the one-off benefit of the UK North Sea tax rate changes which resulted in a credit of AED 553 million. 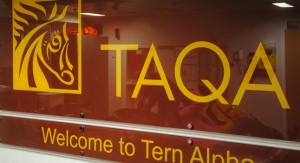 Available liquidity stood at AED 14.2 billion at the end of the quarter, including AED 3.6 billion of cash. TAQA reduced its debt by AED 195 million during the period.

TAQA produced 157,900 oil-equivalent barrels per day, almost flat compared to 158,300 barrels per day during the first quarter of 2014. This was achieved despite a significant reduction in oil and gas capital expenditure.