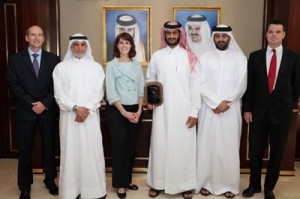 RasGas Operations Projects Department was recently awarded the ExxonMobil Production Company Projects Safety Award for project execution excellence in safety for 2013.
The award recognises ExxonMobil affiliated organisations worldwide that have demonstrated exemplary safety performance in a large operations project organisation category, greater than one million work hours, said RasGas in a statement today.
The Manager of RasGas Operations Projects Department Fahad Al Khater received the award from Tara Parker, Production Projects Manager with ExxonMobil Production Company at a ceremony held at RasGas Headquarters in Doha recently. Hamad Mubarak Al Muhannadi, Chief Operations Officer, Brett Doherty, Chief Safety, Health, Environment and Quality Officer and Omar Al Misnad, Manager, Maintenance Department, were also present on the occasion.
“This award reflects the excellence of RasGas as an operating organisation,” said Al Khater. “A brownfield project execution is one of the most complex in the oil and gas industry, and we are proud to reach this level of safety performance. Operations Projects Department has achieved 26 million man hours without a Lost Time Incident since inception, and the challenge is to keep up such great safety culture and performance,” he said.
RasGas received the ExxonMobil Production Company Projects Safety Award because of their tremendous safety performance, and most importantly, for creating a world-class safety culture that makes this level of success sustainable,” said Parker. “At ExxonMobil, we congratulate everyone at RasGas, including its operators, contractors, support staff and leadership on this well-deserved recognition.” RasGas Operations Projects Organisation distinguished itself by achieving world class performance in regards to recordable project incidents in 2013 with 4.4 million project work hours.
RasGas was selected based on many outstanding attributes in safety performance including leadership commitment to projects, contractor-culture of caring, notable workforce involvement, and engagement through programmes such as B-Safe. ExxonMobil recognised the 2013 achievement as a significant milestone in the relentless pursuit of a combined vision of “Nobody Gets Hurt.”