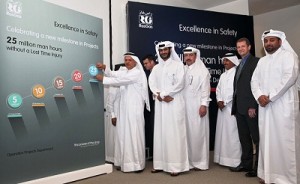 RasGas Company Limited’s Operation Projects Department (OPD) has recently celebrated 25 million man-hours without a Lost Time Incident (LTI). The milestone was achieved by RasGas employees, contractors and vendors working together, for over six years, with safety as a core value.

A special ceremony held at RasGas headquarters celebrated the achievement. “I am proud to be with you celebrating 25 million man-hours without lost time incident. As a world-class global energy supplier striving for excellence, the safety records across the organization demonstrate RasGas’ commitment to excellence in every aspect of its operations,” RasGas Chief Executive Officer Hamad Rashid Al Mohannadi said.
“RasGas’ processes and corporate commitment to safety was recently recognized by one of its shareholders, ExxonMobil, who awarded RasGas the 2013 Project Safety Excellence Award.

“Since OPD’s inception in 2007, its Lost Time Incident Rate (LTIR) has always remained at zero and the Total Recordable Incident Rate (TRIR) was at 0.05 in 2013 despite executing significant projects during that period. OPD’s safety record is better than the industry average according to the Oil & Gas Producers Association (OGP) and Philip Townsend Associates Inc. Texas (PTAI) benchmarking.

“All of these were achieved by the continuous commitment of our employees and contractors, in following RasGas’ safety strategies, systems and processes in their day-to-day operations,” Al Mohannadi added.
During the ceremony, key contractors involved in the achievement were presented with certificates of appreciation and mementoes. In addition to that some of the OPD team members were also honored for their outstanding contribution towards this safety achievement.