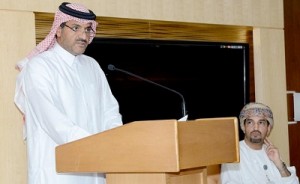 The Gas Lecture Series is a GECF initiative designed to encourage discussions and debates on natural gas related topics in the energy sector involving all stakeholders including producers, consumers, businesses, academics, international organizations as well as non-governmental organizations and the media, a press release Qatargas issued on Wednesday said.

The audience included ambassadors, government officers, representatives from local relevant industries, members of academia and energy experts.
The Qatargas CEO began his speech explaining Qatargas’ view on the global LNG market. Qatar delivers LNG to 26 out of a total of 29 LNG importing countries, accounting for 33% of the world’s LNG supply. The bulk of these supplies are to Asia, which holds 75% of total LNG demand, said HE Khalid Bin Khalifa Al Thani.

He then went on to elaborate on the supply and demand in key LNG markets in Latin America, Europe and Asia.
The number of LNG importing countries in Latin America has doubled, from only three in 2007 to six in 2013 and is expected to reach nine by 2016.
“Even though the gas demand forecast in Latin America is relatively high, long-term volumes of LNG will have to compete with domestic and piped gas.

Additionally, these markets will most likely be supplied by North American LNG volumes from upcoming new regional projects” HE Qatargas’ CEO said.
The LNG demand in Europe has been reduced by the Great Recession, Asia’s strong pull on flexible cargoes, cheap US coal imports and government subsidized renewable energy sources. However, HE Sheikh Khalid expressed his optimism regarding the resurgence of Europe’s LNG demand as its economy strengthens.

The LNG demand in the Asia Pacific region, the world’s biggest LNG market, has almost doubled since 2005 and is expected to reach 320 MTPA by 2025. Although China and India will experience strong LNG demand, the major area of LNG growth will come from South East Asia, a region which had not imported LNG until just three years ago.

Global LNG demand is expected to double in ten years’ time, with 400 MTPA of proposed additional volumes to come online by 2025. However, a significant portion of these new projects will be delayed or cancelled due to the various challenges involved in bringing new supply on-stream. Even if an optimistic view is taken on the number of LNG projects that will go to completion, the LNG market will continue to be tight in the short and medium term as demand growth outpaces supply.

In his concluding remarks the Qatargas CEO said: “Global LNG demand will continue to grow robustly, especially in Asia. The LNG market will remain tight at least until the end of this decade. In order to secure LNG, customers need to attract LNG, or risk facing a choice between higher pollution and lower security of supply. In this environment Qatargas continues to be a critical source of reliable LNG as demonstrated by our exemplary delivery and safety record and underpinned by our strong resource base; sound partnerships with international oil companies and solid support from the State of Qatar.”

It is noted that Qatargas Operating Company Limited (Qatargas) was established in 1984, and pioneered the Liquefied Natural Gas (LNG) industry in Qatar. Today, Qatargas, under the guidance of His Excellency Dr. Mohammed Bin Saleh Al Sada, Minister of Energy & Industry of the State of Qatar and Chairman of the Board of Directors at Qatargas, is the largest LNG producing company in the world, with an annual LNG production capacity of 42 million tonnes per annum (MTA) and is realising its vision to deliver LNG to its customers around the globe, from its world-class facilities in Qatar.